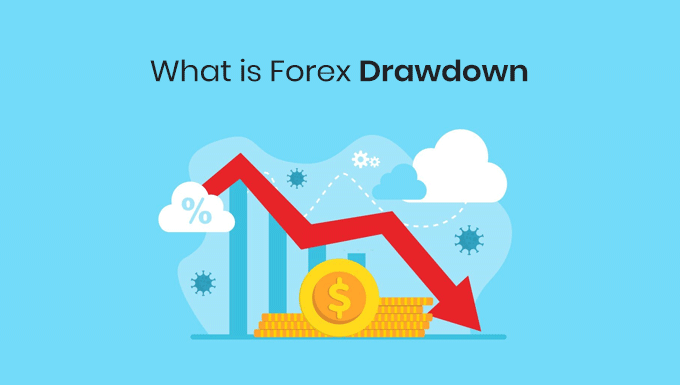 Big profits always come with big risks. Therefore, traders must focus on capital management and risk control in order to maximize profits. Drawdown is an important way to measure this level of risk. So, what is drawdown in forex? What is acceptable drawdown in forex trading? This article will tell you everything you need to know about forex drawdown.

What is Drawdown in Forex?

How to Calculate Drawdown?

The drawdown in forex trading is measured as a percentage of your account balance.

The forex drawdown formula = the amount of capital that fell the most in the period (= capital bottom – capital peak) / the amount of money invested at the height of the period.

To understand how drawdown works, let’s look at the following example: 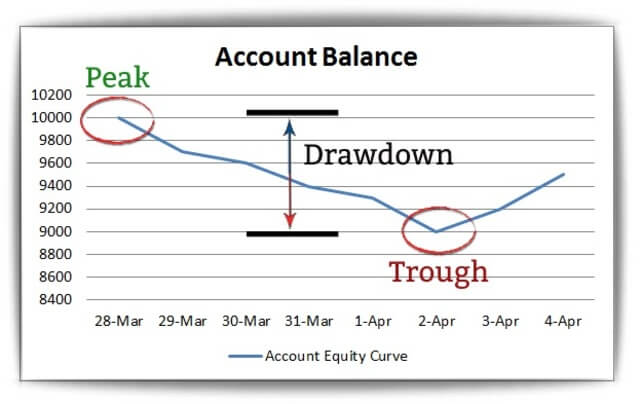 Note: In this case, the maximum drawdown is also 10%, since that’s the same as the maximum peak-to-trough decline.

If we use the same trading example, the drawdown was USD 1,000 because that’s how much the account equity dropped after the losing streak.

What Are the Types of Drawdowns in Forex?

There are three different ways to calculate drawdown. Also, each type of drawdown shows a different level of risk on the trading account.

Drawdown can be absolute, maximum, or relative.

The absolute drawdown shows how big the loss is compared to the initial investment.

Let’s look at an example to understand how absolute drawdown works: 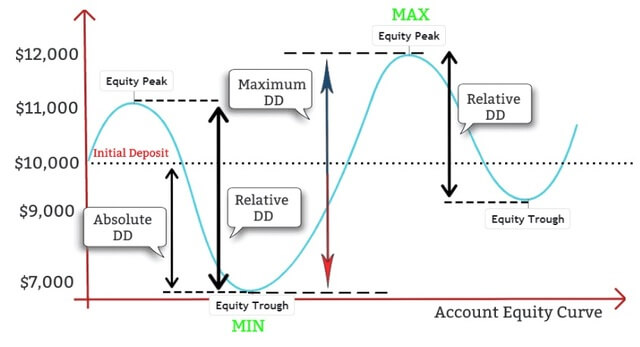 The maximum drawdown is the difference between the highest capital peak and the lowest capital bottom of the performance. It shows the account’s biggest loss during the whole trading process. It shows a higher level of risk than Absolute Drawdown.

Your unrealized loss is your relative drawdown. Drawdowns are temporary as long as you hold on to your position. They only become realized when your stop loss is triggered or you close your position.

But once the losing trades are closed, the drawdown becomes fixed. Both the absolute DD and the max DD are fixed.

What is Acceptable Drawdown in Forex?

The most important drawdown indicator is the Maximum Drawdown or Relative Drawdown, which clearly shows the maximum drawdown of an account and how risky it is. So what is the best Maximum Drawdown?

The most correct answer is: The lower the Maximum Drawdown, the better, and the less risk.

But forex trading isn’t always profitable, and losses are inevitable. So, even if they are a professional trader, their Maximum Drawdown should still be higher than 0%.

There is no single ratio that can be used to figure out which account has a good drawdown. But experts usually use the 20% mark to decide how risky an account is. This means that the Maximum Drawdown can’t be more than 20%.

Why Forex Drawdown is Important? 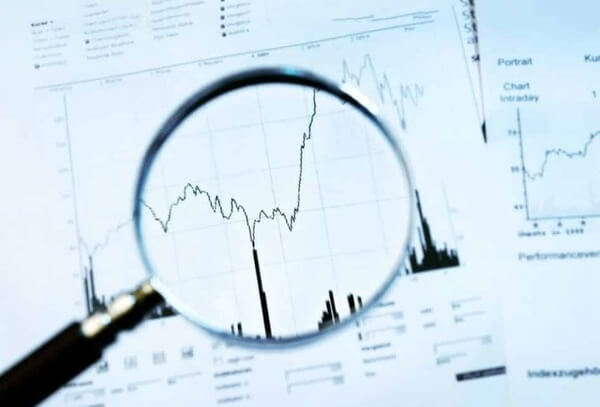 Since losing money is always a part of investing, traders must keep it under control by keeping the drawdown as low as possible.

Drawdown is important to measure because it helps forex traders figure out how volatile their account capital is. In other words, it will tell you how much and how far your account balance will drop after a string of losses.

Backtesting a trading system to see how well it did in the past is not everything. Traders have to pay attention to the drawdown rate. If the drawdown is too big, the risk is high.

In forex trading, keeping track of drawdown indicators is a good way to manage capital and risks. If the drawdown ratio of the account is low, it means that the trading system works well and is stable over time. The trader needs to keep the profit rate for each trade at that point.

On the other hand, a high drawdown ratio means that your trading strategy is risky. At this point, traders must modify their trading tactics in order to minimize the loss and protect capital.

If a trader wants to buy or use an automated trading robot or a forex signal, the drawdown is an important factor to consider along with the profit margin. If an EA has a monthly average return of 30% but a Relative Drawdown of up to 65%, then that EA has a pretty high risk level, so traders shouldn’t choose it.

How to Recover From a Drawdown in Forex?

Another important factor to consider when learning what is drawdown in forex and how it works is the time it takes to recover from a drop in your account balance.

For example, if a string of bad trades has caused your account balance to drop by 50%, you’ll need to make 100% to get back to where you started.

The main point is that it takes more work to recover from a big drawdown.

Let’s go back to our first example and figure out how much trader John would have to make just to get back the 10% maximum drawdown. Beginner traders mistakenly believe that if they lose 10%, they must make 10% to breakeven (BE). Unfortunately, that’s not how forex trading works.

The table below shows how different levels of drawdown relate to how much you need to make back to get back to where you started.

The key takeaway from this is that you must manage the drawdown since it will be more difficult to recover from a bigger drawdown. The amount of money required to return to breakeven will always be more than your DD.

How to Reduce Drawdown in Forex?

Here are 6 ways you can reduce drawdowns.

Drawdowns occur from time to time, which is fine, but only if they are the result of a market change. Although they don’t occur over night, large drawdowns always begin with a small drop in your account equity curve.

When real money is on the line, a drawdown can be an emotional roller coaster for many traders. This adds more stress, which usually makes traders make more mistakes, which leads to bigger drawdowns.

However, if you are in a hurry and want everything back, you will most likely be unable to do so. Try not to let your emotions get in the way of your trading. So, traders must have good control of their trading psychology if they want to have a low drawdown rate.

Read also the article “How to Master Forex Trading Psychology”…

2. Set the maximum drawdown for your trading strategy

The maximum drawdown limit is not more than 20%. Some people choose the rate of 20%, but others choose 15%. Moreover, traders need to set limits for a specific time period. For example 1 week, 1 month or 1 quarter.

A trader makes a maximum rule drawdown no higher than 20% for a month. If this ratio exceeds 20%, the trader is no longer trading. After that, traders need to review their trading system or capital management strategies and start with a new system in the next month.

3. Reduce the size of your position

One of the rules traders can apply is to limit the loss of each order to only 1–1.5% of the total available capital of the account. With this principle, if the trader loses ten consecutive orders, the account will only lose 10-15%. If you lose 20 orders in a row, the account loses 20-30%. The ability to recover to breakeven is possible.

4. Open one trade at a time

5. Focus on the strategy

While most of trading requires quick decisions, long-term planning is essential for success. You need to come up with a plan for trading and think of each trade as a small part of the overall plan. So, you won’t make rash decisions or act without thinking.

Setting a daily loss limit caps losses at a set threshold. When you reach the daily loss limit, you must stop trading for the rest of the day and wait until the next day to start trading again. As a general rule, experienced traders limit their daily losses to 5% to 6%.

Every trader is afraid of a drawdown. But losses are part of forex trading and are not a bad thing. It is important for every trader to understand what is drawdown in forex trading and how it works, because sooner or later they will have to deal with it. As this article explains, traders need a good trading strategy and good risk management so they can keep their losses to a minimum and make money in the long run.