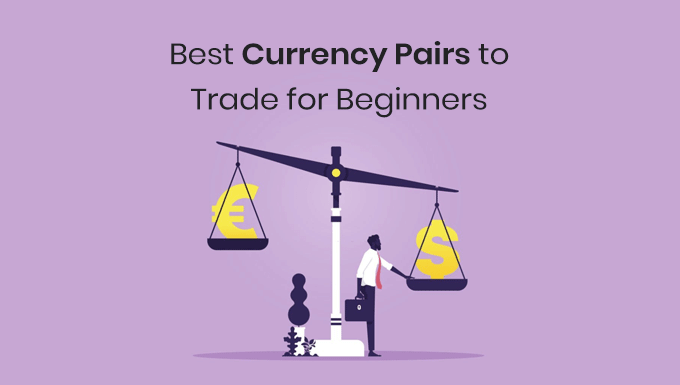 Do you know that the US dollar is involved in more than 50% of transactions on the forex market? Out of the US dollar currency pairs, the EURUSD is the world’s most traded currency pair, accounting for almost 30% of all forex trades.

Traders like these currency pairs because they are more liquid and have better trading conditions than other pairs.

Beginner traders often wonder what currency pairs to trade on the Forex market. Some of them try to trade all of the currency pairs in the trading terminal, but this is fundamentally wrong.

Today, I’ll talk about the most traded currency pairs in the forex market, the best currency pairs to trade for beginners, and which ones should be avoided.

What is a Currency Pair?

Each currency can be abbreviated to 3 letters in accordance with the ISO 4217 standard. This standard selects the first two letters in the currency abbreviation from the country of origin and the last letter from the currency denomination.

For example, the US dollar USD consists of the first two letters of the country – USA and the name of the currency – Dollar.

However, there are a few exceptions.

For example, the currency MXN, which is the Mexican peso. Here MX comes from Mexico, but the name of the currency is indicated by the letter N.

Here is a list of major forex currencies and their abbreviations:

A currency pair, as the name implies, consists of two currencies that express the ratio of the prices of these currencies to each other in the market, or in simple words, the exchange rate. When buying one currency on Forex, a trader simultaneously sells another. In this case, the first currency in the pair is the base currency, and the second is the quoted currency.

The International Organization for Standardization (ISO) decides which currency will be considered the base and which is quoted.

Forex currency pairs are divided into major, minor (cross-currency), and exotic currencies. Major pairs are the most liquid currency pairs, accounting for more than 80% of the trading volume in the foreign exchange market:

As you can see, they have one common factor – this is the US dollar, and other currencies belong to the Eurozone and the US partner countries for the export of natural resources and technologies.

If you remove the US dollar from the list of major currency pairs and cross them with each other, then you get minor or cross-currency pairs:

Exotic currency pairs are relatively illiquid pairs and have very wide spreads as a result of their illiquidity. These pairs are usually the Swedish, Danish and Norwegian krone, South African rand, Turkish lira, and Mexican peso currency pairs.

These lists are by no means exhaustive. On your Forex trading platform, you are likely to see more minor and exotic currency pairs than listed here.

Here are the most traded currency pairs by trading volume and currency. 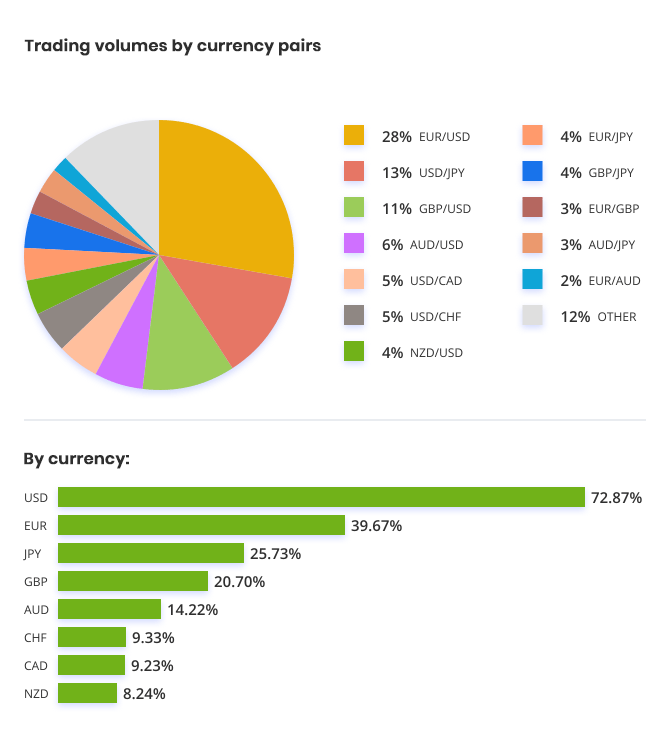 I strongly recommend that beginners only start trading major currency pairs, as they have a low spread, easy to analyze and make predictions.

At first, it is generally better to give your attention on two or three currency pairs and not be sprayed on all pairs. This way, you will not miss a signal, you will be able to close a deal if something went wrong quickly, and your deposit will be able to withstand small drawdowns.

Over time, as you gain some experience, you can add cross-currency pairs such as EURJPY, GBPJPY, and EURGBP, but remember that they have a high spread, which means they are not suitable for scalping.

I recommend excluding exotic currency pairs from trading altogether. They are more suitable for experienced traders. They have an even higher spread and swap. They can be traded only if there is an informational reason or during a regular price movement from one level to another for a long period of time.

Here are the best currency pairs to trade for beginner traders. 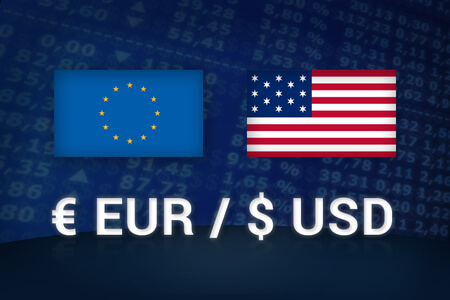 The EURUSD is the most traded currency pair in the Forex market and has the most liquidity. The latest data from the Bank for International Settlements (BIS) shows that EURUSD accounts for 23% of the total daily trading volume in the Forex market. Due to the volume of trading and the amount of money that goes into trading EURUSD, this pair has the lowest spreads in Forex. The intraday trading range for EURUSD is 100 pips on average.

Characteristics of the EURUSD currency pair:

The following factors affect the movement of the EURUSD pair:

EURUSD can be traded by both experienced and new traders. EURUSD has a reasonable intraday range, so it is suitable for day trading as well as scalping and intraday trading. EURUSD can be traded using technical and fundamental analysis. It trades very actively in the London and New York sessions, so it lends itself to reacting to important news releases coming out of the US and Eurozone. Always check the economic news calendar for the schedule of these news.

It is also important to keep an eye on the EURUSD currency correlations. It correlates positively with GBPUSD and negatively correlates with USDCHF. Comparing these charts may indicate arbitrage trading opportunities for EURUSD. 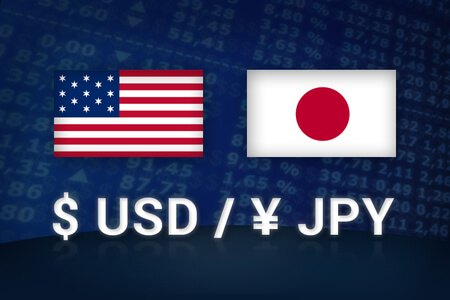 Characteristics of the USDJPY currency pair:

The following factors affect the movement of the USDJPY pair:

USDJPY should not be traded by novice traders until they have attained some degree of demo trading experience with news releases affecting the JPY. USDJPY trading is suitable for those practicing swing and position trading. USDJPY is marked with low daily ranges. It is not very suitable for range trading when the currency pair is in consolidation. 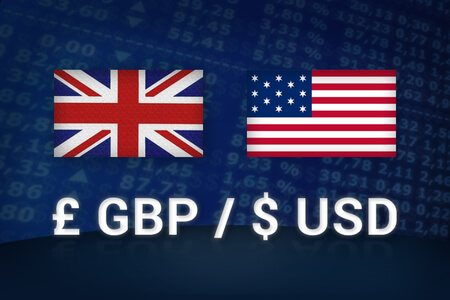 Characteristics of the GBPUSD currency pair:

The movement of the GBPUSD pair is influenced by the following factors:

GBPUSD has a positive correlation with EURUSD and tends to increase any movement on EURUSD. Trading GBPUSD requires a little experience. The currency pair is well suited for intraday trading and scalping due to its large intraday range. High volatility is observed during news releases in the UK and at the opening of the New York session. GBPUSD is known for its erratic moves in the middle of news trading.

Characteristics of the AUDUSD currency pair:

The following factors affect the movement of the AUDUSD pair:

AUDUSD is well suited for novice traders due to its slow movements. At some point, it was used to carry trading. AUDUSD is characterized by a slow but steady reaction to major news releases.

Now you know the most traded currency pairs on the forex market, what types they are divided into, and what currency pairs are best for beginners to trade. Happy trading!